With so much troubling, worrying, and negative news stories, I thought I would start a new tradition of finding positive articles, stories, or anecdotes that I would share with you to start the week. This story was shared on CTV News (the link is attached at the end of the article). I have transcribed it here in case it gets removed by that webmaster at a future date.

And on Tuesday night, the Vancouver resident was successful.

“I’m not gonna lie I kind of buckled. As soon as I saw (him) pull her out of the bag my knees just buckled,” she said in a Skype interview.

“I just started sobbing and I grabbed her out of his hands and I couldn’t let her go.”

The bear was stolen Friday while Soriano was moving to a new apartment, and her social media plea for help went viral. Celebrities such as Ryan Reynolds and George Stroumboulopoulos each promised $5,000 rewards for its return.

Marilyn Soriano was diagnosed with cancer about 10 years ago when Mara was 18 years old.

Her mom gave her the bear in December 2017 and it included a voice recording made by Marilyn reminding Mara of the love between mother and daughter.

It was also a last memory of Marilyn’s voice because it changed as her cancer progressed.

“It was much softer. The cancer had really eaten away at her and that bear was basically the last reminder of the mom that I knew – it was her voice that I remembered growing up,” she said in an earlier interview.

After a year-and-a-half of treatment, Soriano’s mom died last June.

Her mom had put the toy together at Build-A-Bear adding glasses and a jacket like the ones she used to wear, Soriano said.

The glasses weren’t returned but she said she’s not worried and will ask Build-A-Bear for a similar pair.

Soriano said she got an email around 9:30 p.m. Tuesday night from someone who said they had the bear and wanted to return it to her.

She was skeptical, she said, because the man did not have many details, so she set up a “safe meeting space” with a member of the media present.

“We just waited and lo and behold, the two kind Samaritans came, and they gave Mama Bear back.”

The bear was kept in a bag and the Good Samaritans told her it hadn’t been handled, she said.

She described the bear as being in perfect condition and smelling and feeling great.

There was a little bit of bicycle grease on the bear’s jacket but “nothing a little laundry can’t fix,” she said. 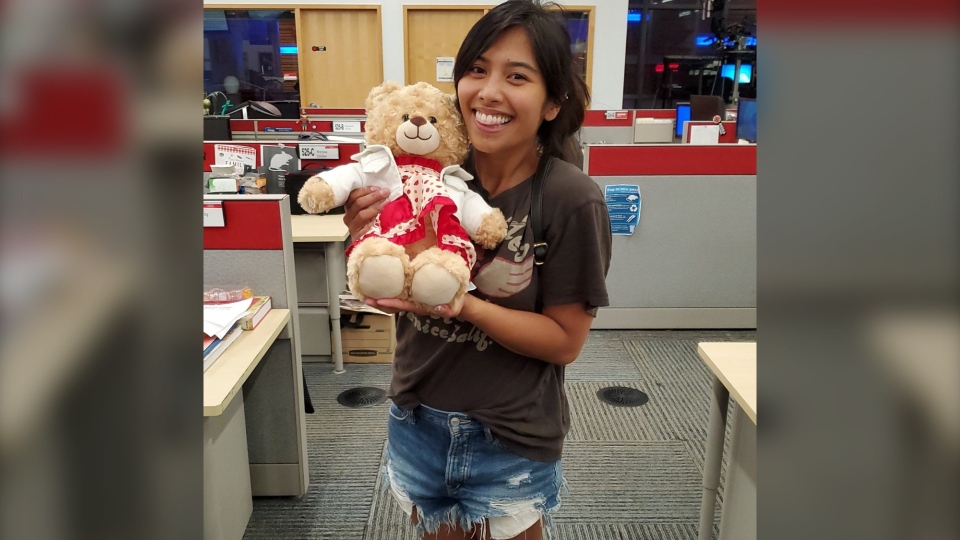 The Good Samaritans told Soriano they saw security footage she had posted online, recognized the person seen taking the backpack containing the bear and got it back from him, she said.

Mama Bear was lost last week as Soriano was moving to a new apartment and was interrupted by a call from a friend who had been hit by a car while on his way to help her. She rushed to his side but, amidst the “panic and frazzled state” forgot her backpack.

The friend is okay.

And while the bear is now back, Soriano lost an iPad with photos and video of her mother that hadn’t been backed up.

“I just wanted the bear. The bear is what’s the most important part. She made it herself.”

Soriano said her mother would have been “super happy” to hear of the great outcome but would also have reminded her to have faith.

“I feel like she would have said ‘I told you so’.”

When she gets married next summer, Soriano said the bear will have a special seat where her mom would have been.

But for the next few days, she said she’s going to carry Mama Bear around.

“It’s hard to let it go. I’m going to sleep with her tonight. I’m going to show her the new apartment, it’s just been the wildest three hours,” she said with a laugh. “It literally just happened, and I still can’t believe it.”

This report by The Canadian Press was first published July 29, 2020

This article was first published here

Get your copy today- Browse our entire book collection by clicking on this link: